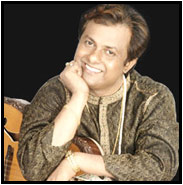 The art of classical music is practiced in the India since ages. It is not only a popular form of entertainment, but is also believed as the means of connecting with the Divine Being. Expressed in two modes: vocal and instrumental, Indian Classical Music has a rich heritage, which has been kept alive by the maestros of Indian music. For a musician with substance, the sky is the limit and one such gem to have touched the heights is Shri. Debashish Bhattacharya. With music in his genes, he made debut at the age of four at All India Radio, Kolkatta, where he was blessed by late Ustad Karamatullah Khan of Farukhabad Gharana who accompanied him on the Tabla.


Belonging to the family of vocalists, where music has been brought down from generations. Shri. Bhattacharya was introduced to music by his father, Pandit Ajay Chakraborty, who himself is a renowned vocalist. He with his siblings have carried on his legacy; his brother Subhasis is Tabla maestro and other rhythm instruments, while his sister, Sutapa is a very popular singer.


With exposure and age, his talent grew and his influence could be seen in his fellow musicians. A trend setter, music is his soul. He does not believe in Indian or western music but believes it as a faith. His unconventional sense and understanding of music has made him a versatile star, be it of Indian or other classical, jazz, blues, folk or Nue Musi. Having expertise in many styles like Patiala, Gwalior, Jaipur and other schools of Indian vocal tradition, Shri.Debashish Bhattacharya has also mastered in instrumental music like Maihar and Seniya in his style of the guitar playing. Pandit Brij Bhushan Kabra is his guru, under whom he took spiritual training for ten years.

His achievements are remarkable, at the age of twenty, Shri.Debashish Bhattacharya received President of India Award for winning National Music competition of All India Radio. He was also awarded the Top Grade, the most prestigious given by Prasar Bharati. The Director of International Slide Guitar Parivar, has attracted devotees of music from around the globe. Debashish catches every heartbeat when he performs. A trend setter, he has introduced a new finger style as well as playing style which combines thumb and index finger, which produces finest bole, fastest Taanas and strongest Jhala. He has also written a syllabus on Indian Classical Guitar, the first of its kind, including technical terminologies and abbreviations.


He is charismatic as a Musician, Revolutionary and Guru. A deep relationship between vocal and instrumental styles can be seen in his style of music. The power of Dhrupad, Khayal and Thumri, Gat kari and his innovative explorations brings a mesmerizing effect in his multi-coloured instrumental music. The beauty of such blend intoxicates his audience the world over.

The versatile musician and vocalist is not only a trend setter, but holds a list of achievements behind him. He is the only musician in the history of the world music and Indian classical music who has created a trinity of slide guitars. Christened as CHATURANGUI, GANDHARVI, and ANANDI, Shri.Debashish Bhattacharya is an extremely talented. His hard work and training under Gurus like Pandit Ajoy Chakrabarty, the world-renowned vocalist and Pandit Brij Bhushan Kabra, the living legend and pioneer of Indian Classical Guitar has shaped Debashish as the best Classical Guitarist today.

" We the musicians, who were born in early sixties, have grown up in a fast changing world.”....Debashish Bhattacharya.